We Went to Vietnam and Some of Us Came Back If you answer no to one or more of these questions, it doesn’t mean the issue is not important;
it means you should find a way other than war to resolve the matter.

Even though the National Vietnam Veterans Art Museum is only a few miles south of the Art Institute, not many people know about it. Even though it is the only museum in the world dedicated to the personal stories of war, not many people have ever been to it. Since this country is currently at war, it is important to understand what war means, what it does when it not only takes a life, but when it leaves one behind. It is eerie how similar Vietnam is to the current war on Iraq. Twenty-nine years after the last American troops left Vietnam, we are once again at war with a country that posed no direct threat to us. While our government proclaims that we are “spreading democracy,” our own freedoms are suppressed. After experiencing the re-election of George W. Bush, it seems that the end is not near, and many more lives will be lost. But Vietnam and the current war in Iraq are not something we can take back; they must be dealt with. The work in the National Vietnam Veterans Art Museum does precisely that.

There is no possible way to say exactly when the art of the Vietnam War began, but there is a clear history of the museum. In 1980, a group of veterans decided to put a show together at N.A.M.E. gallery in Chicago. A call for artists was made and ads were placed not only in art magazines, but in other special interest publications such as Hot Rod. In October of the following year, the first exhibition of the Vietnam Veterans Group opened with eleven participating artists to a crowd of roughly two thousand people. After the success of the first show, the collection traveled from 1983 to 1992 to over thirty states in the U.S. In 1995, the City of Chicago donated a vacant warehouse to the group and in August of 1996, the site officially became the National Vietnam Veterans Art Museum (NVVAM).

In their mission statement the NVVAM asserts an “apolitical” stance, accepting art from the United States, Australia, Cambodia, Thailand, and North and South Vietnam. With over 900 artworks in its collection, the pieces range from painting, sculpture, drawing and photography to poetry and music. On display right now are two extraordinary shows which clearly express their undertaking: Women on War which opened on Veteran’s Day and a show of their permanent collection. The NVVAM does not just exhibit art work; it tells the personal stories of the men and women who went to Vietnam. Underneath the words “Women on War” hang sixty-seven dog tags symbolizing the number of American women that died in the Vietnam War. To the right of the dog tags is a list explaining what group they worked with and when they died. With a silent sense of honor, the artwork in this show pays homage to the memory of these women.

As each piece tells a story, there is no way to explain the power that each holds. While they all share the universal experience of the disasters of war, there is no way to do it justice in newsprint. However, I would like to point out a few that stuck out for me.

Jean Watson, who served from 1966-67 in the 85th Evacuation Hospital in Qui Nhon, obsessively paints dragons. In this show are twelve vivid dragon paintings that vary in intensity, color, and emotion. The wall panel explains, “According to legend the Vietnamese were fathered by a dragon prince.” Through her artistic process depicting these dragon figures, Jean has “made peace with the children of the dragon.”

Close up color photographs of flowers expand across another wall. Unclear whether these were taken in Vietnam or when she returned, Brenda Looper Jansons, Nurse in the 36th Evacuation Hospital Vung Tau, reflects, “I used a Canon camera got in Vietnam to capture my world for my childrenƒI wanted them to take a closer look at the gifts of beauty all aroundƒthere’s enough beauty in nature to calm traumatic memories, and, in time, to even heal.” 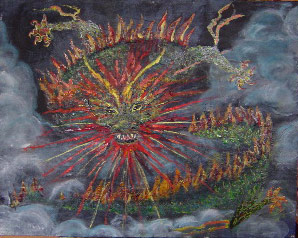 On a pedestal sits the personal photo album of Ms. Jo Collins, which visitors are welcome to thumb through. A letter on the wall sent to Hugh Hefner elucidates this donation. It was written by the first American army troop unit committed to action in Vietnam, men who “found the answer to ‘ask what you can do for your country.’” Describing the loneliness they experienced while serving their country they longed “to see a real, living breathing American girl.” Enclosed with the letter was a money order for a lifetime subscription to Playboy magazine donated by 180 men because they had heard that the first issue would be “personally delivered by a playmate.” Their playmate of choice was Miss Jo Collins, 1965 playmate of the year, and these are her photographic memories from that trip.

The entire first floor exhibits selections from the permanent collection. Two photographs are place side by side in “Before and After Self-Portraits” by Kimo Williams. The first photograph is in black and white and depicts a young boy dressed in his fatigues holding a rifle. It is dated, “Lai Khe, Vietnam 1970.” Adjacent to it is a color photograph taken eighteen years later in the same spot, except this time, the soldier has traded in his rifle for an electric guitar.

NVVAM’s own National Memorial, “Above and Beyond”, hangs over the entryway of the museum. Dedicated in 2001, the work consists of 58,226 dog tags with the name, branch of service, and date of casualty of every U.S. soldier killed in the Vietnam War. Suspended from the third floor ceiling, this powerful piece took two years to complete. Remarkably, an unexplainable surprise occurred when light first hit the finished work and the shadow cast upon the wall created the exact form of Maya Lin’s National Vietnam Memorial in Washington D.C.

No matter what your position on the war is, the National Vietnam Veteran’s Art Museum, is a powerful place to visit. As our own war in Iraq rages on, this museum offers the voices of those who have experienced war first hand. While Vietnam was known as the first television war and each night the war entered people’s living rooms filling their memories with images of unanswerable devastation, we see a different side of Iraq. In between our reality TV and late night talk shows, we miss the true reality of our war. As our own country censors from honoring the coffins returning home, NVVAM allows us to honor those who came home, no matter which side they were on, to communicate the personal consequences of war.

The National Vietnam Veterans Art Museum is located at 1801 S. Indiana and is open 7 days a week.

Arts & Culture, Uncategorized We Went to Vietnam and Some of Us Came Back 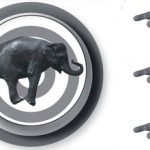 Conservative in a Liberal Art School 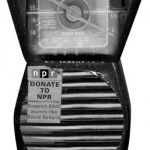 Too Cool for NPR? A listener Speaks Out Against...