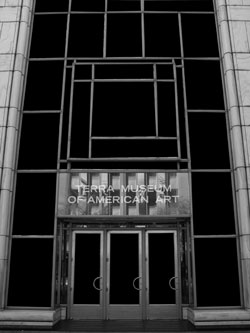 But someone will surely protest, “This is overly sentimental! Unnecessarily melodramatic!” Typical of young bleeding hearts to criticize when they have only been there a handful of times themselves, and who will mostly be glad when they have but to trip across the street now, instead of making the perilous journey six blocks north, to visit the collection. Ah, but despite these most rational voices in one’s head, it cannot be helped. The Terra Musuem of American Art closes its doors on October 31.

Fifty paintings and three hundred and fifty prints and drawings from the Terra collection have been chosen for transplantation to the American and Prints and Drawings Departments of the Art Institute. These works will have “long-term loan” status for the next fifteen years. The Art Institute has no plans to acquire these works from the Terra at the end of the loan period, although James Wood, former Director and President of the Art Institute, has stated that he hopes these works will gain “permanent loan” status.

The works selected for the loan were chosen through a series of discussions between Art Institute curators and representatives from the Terra Foundation. The Art Institute’s primary concern in selecting works to take on as part of the agreement was to choose pieces that would work well with the Art Institute’s own collection. Prime examples include an Arthur Dove print, which will certainly have a fine place in context with the Dove print already in Art Institute’s collection. Arthur Dove was the first American abstractionist, and there is debate as to whether he actually beat Wassily Kandinsky to the punch in painting the first completely abstract image. As a pair, these two prints by Dove will provide a unique opportunity for scholars of early abstraction to see them side by side with the works by Kandinsky in the Art Institute’s collection. The Art Institute plans to integrate the works from the Terra into the American Wing of the Rice Building, which is purportedly expanding to include galleries currently part of the Contemporary Art and special exhibitions spaces.

And what of those three hundred wallflowers not selected for a dance through the halls of the Art Institute? The Terra will maintain ownership of these works and it is speculated that they will either be put into rotation at the Terra’s other museum in Giverney, France, or will be lent to other institutions.

In 1980, when Daniel Terra’s initial hope that his collection of American art would be taken on by a major institution was unfulfilled, he decided to open his own museum in a former flower shop in Evanston. The Terra in Evanston did well, thanks to the support of its suburban patrons who, while hungry for visual culture, were reluctant to make the trip into Chicago. TheTerra’s success in Evanston was also due in part to the enthusiasm of its founder, who made a visit to the Terra unique by often interacting with visitors to his collection. The comfortable neighborhood gallery style that the Terra Museum boasted in Evanston did not translate as well as Daniel Terra had hoped it would into the middle of Michigan Avenue. In 1990, a formal report was prepared on the way the Terra was operating and suggestions for how to boost the museum’s numbers were made. Unfortunately, the suggestions in the report were not acted upon and despite the struggles of the Michigan Avenue Terra, a branch of the museum was opened in Giverney, France.

The Terra’s final show, “Chicago Modern, 1893-1945: Pursuit of the New,” was the culmination of an exhibition series on early American Modernism. The attention that this exhibition paid to artists, not all of whom are necessarily considered vastly important within the history of American painting, was the kind of show not likely to be repeated in exhibitions at the Art Institute in terms of its focus on artists who lived, worked, and found inspiration in the city of Chicago. The individual consideration paid not only to these artists with relation to their work as it is hung on the wall, but to the stories of these individuals who, as many artists are, were also educators, students, and activists, painted a unique portrait of the art-making community in Chicago during the early twentieth century.

Careful attention was given to the School of the Art Institute’s own history with respect to the development of modernism, and because of that, “Chicago Modern” was of particular interest to alumni, current students, faculty and administrators of the school. One can only hope that future exhibitions at the Art Institute will take up a similar interest in the school that the Art Institute was founded in support of. As has been commented on by the press and others, the Art Institute loan agreement is certainly fulfilling Daniel Terra’s original wish for his collection, at least in part. However, one cannot help but speculate that equally important to Terra as finding an established institution for his collection would be for the collection to remain an echo of Chicago’s distinct art community throughout the ages.

The works from the Terra will be on display and available for study in the Prints and Drawings study room at the Art Institute beginning in April. The Terra Foundation hopes to have information and images on every object in their collection on their website (www.terramuseum.org) by mid-November.