Cinematters: David O. Russel Gets Existential in I Heart Huckabees

David O. Russell’s star has been shining brightly ever since George W. Bush started talking about Iraq. Over night, his 1999 film Three Kings, a penetrating and highly intelligent look at the first U.S. invasion of Iraq, was once again relevant. His latest film, the curiously named “I Heart Huckabees”, is a star-studded comedy that recently opened to mixed reviews.

David O. Russell’s star has been shining brightly ever since George W. Bush started talking about Iraq. Over night, his 1999 film Three Kings, a penetrating and highly intelligent look at the first U.S. invasion of Iraq, was once again relevant. His latest film, the curiously named I Heart Huckabees, is a star-studded comedy that recently opened to mixed reviews.

Set in a Huckabees department store, the film revolves around a character named Albert Markovski (Jason Schwartzman), a young environmentalist who bumps into a tall Sudanese exchange student three times in the span of a single week. He hires “existential detectives” Bernard (Dustin Hoffman) and Vivian (Lily Tomlin) to discover the meaning behind this apparent coincidence. In order to unravel the mystery of his being, the detectives, a couple not averse to engaging in gratuitous displays of public affection, follow him everywhere, taking notes and making recordings of his conversations.

Other central characters include Brad Stand (Jude Law), a Huckabees executive who uses Albert’s environmental group to improve the image of his Sears-like corporation. Brad’s girlfriend, Dawn Campbell (Naomi Watts), is a flighty model that represents Huckabees in its ad campaign. In addition, we meet Tommy (Mark Wahlberg), a firefighter who is also being investigated by the existential detectives and ultimately gets assigned to be Albert’s “other.”

The performances are admirable all around, but Mark Wahlberg really stands out from the rest as the conflicted firefighter who is obsessed with the issue of energy consumption and succumbs to the nihilistic views of Caterine Vauban (Isabelle Huppert). The latter is a renegade French existentialist philosopher who disagrees with Bernard and Vivian on the fundamental issue of the interconnectedness of things. The detectives believe in a sort of New Age universe in which everything is connected to everything else, while Caterine believes in “cruelty, manipulation, and meaninglessness”.

As with most screwball comedies, there is no serious cinematic technique to sink one’s teeth into. The intention is to let the performances and the writing do the heavy lifting. Nevertheless, there are a few shots in which a series of very low-end digital effects are used to support the content of the story. Most of the time, these cheesy effects fall flat, but towards the end of the film, when Albert finally experiences the “blanket,” the technique is used with a degree of success. As Albert holds a picture of his arch nemesis Brad Stand, we see segments of his own face contorted in pain, flying down to superimpose onto Brad’s face.

It might bother some people that the existential detectives actually sound more like pop quantum physicists than true existentialists. This is an important point, but more important is the fact that the form of the film is too conventional to be considered truly existential. Existentialism was brought to cinema during the French New Wave and was embodied in the paradigm-shifting films of artists like Jean-Luc Godard and Alain Renais. These legends actually played with the form as well as the content of their films (Godard would actually go as far as to disagree with this distinction in the first place). Unfortunately, due to the intense pace of the dialogue in I Heart Huckabees, any more experimentation than the above-mentioned low-rent effects would run the risk of making the film incomprehensible.

Nevertheless, Russell is trying to get at the deeper issue of spiritual authority. At this, he succeeds admirably. We live in a world in which Russell’s existential detectives could not exist. On one level this fact bolsters the comedy of the piece, on another level it speaks to a great void that exists in our culture. Who doesn’t on some level wish that they could once again believe that a spiritual master has the answers, or even that a particular school of thought holds the keys to a meaningful life? The brilliance of Russell’s film, is that it evokes in us this desire for authority and reminds us that the competing ideologies of its characters are, in reality, insufficient. Meaning does not come from spiritual masters anymore than it comes from tabs of LSD. Schools of thought are at best incomplete access points to deeper truths that must come from within.

I Heart Huckabees is one of those films that you either love or hate. It is densely packed with fast-paced and overlapping dialogue that drives the whole project in a way that can at times become overwhelming. There is an almost claustrophobic feeling to the film that comes from a constant need to keep up and we are not given much time to process anything. On the other hand, if you bear with it, I Heart Huckabees can be a rewarding, albeit challenging, cinematic experience. 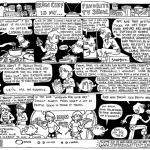 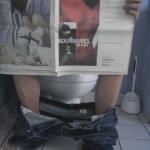