Virgil Abloh Through the Eyes of His Colleagues: “He lit everyone on fire”

Reflecting on the enduring legacy of the iconic Chicago multi-hyphenate Virgil Abloh. 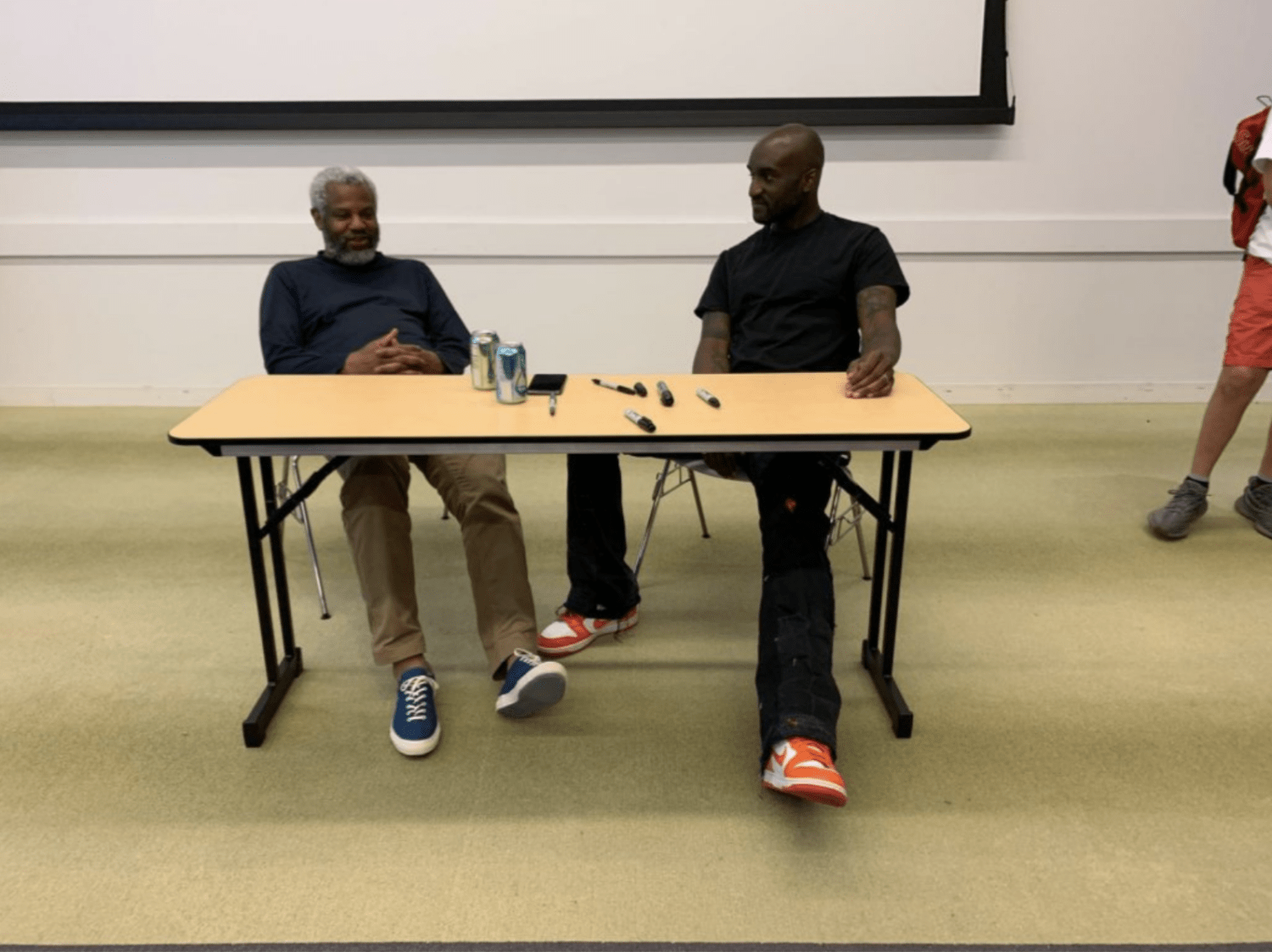 Hamza Walker (Painting and Drawing) and Virgil Abloh speak to Walker’s class of MFA students in 2019. Photo courtesy of Canary—Yellow.

Turning my phone back on after a two-hour flight to Chicago, I immediately received the news that Virgil Abloh had passed away. Abloh, the artistic director of Louis Vuitton menswear and founder of Off-White, had passed away Nov. 28, 2021 after battling cancer in private. Michigan Avenue felt foreign in the days after he passed — in the brief time I had been back in Chicago, there was a silent grief among the rows of luxury fashion flagship stores, replacing the previously lavish displays I had been accustomed to.

Louis Vuitton storefronts across the world replaced their monogrammed displays with “Virgil was Here.” But what differentiated the Chicago store from its global counterparts was not a design or font, but in its physical proximity to where Abloh’s dream began: he received his master’s degree in architecture at the Illinois Institute of Technology (IIT), designed t-shirts at Custom Kings, and created local friendships that existed beyond the lens of his career. 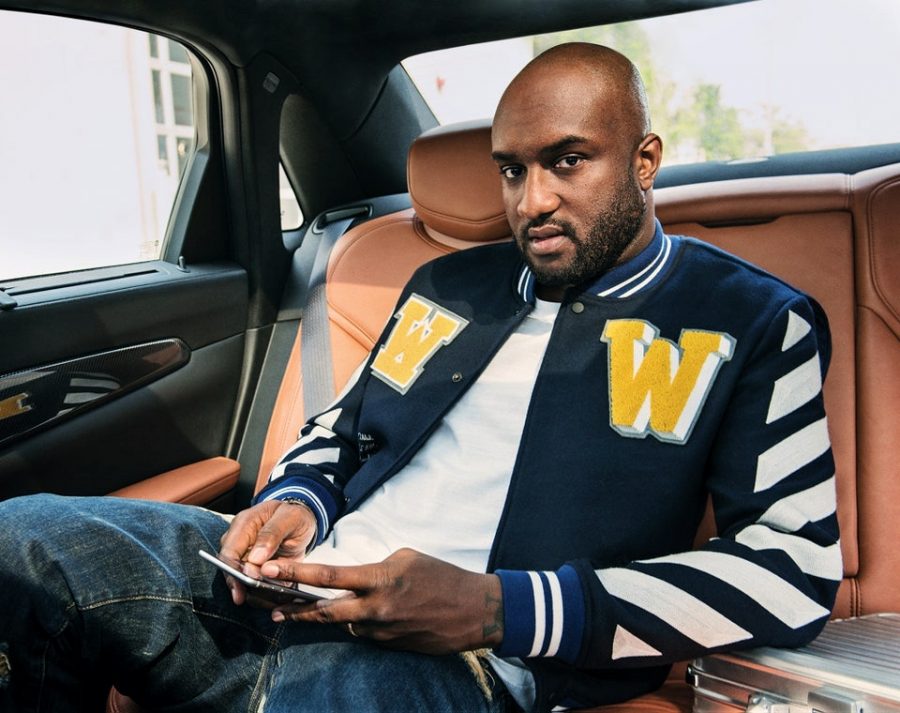 But that by itself doesn’t make the phrase any more true. Those three words, “Virgil was Here” are an ambiguous commemoration of Abloh’s career. The impact Abloh had reached into a vast array of different mediums, intersecting fashion, music, fine art, and interior design. Anyone can call themselves a multi-hyphenate, but it takes more than a title to stand out in the creative zeitgeist.

“[He was] like Andy Warhol with graphic design, who had a keen sense again of a more expansive sense of culture,” Hamza Walker said. “Film, magazines, in addition to paintings, prints, drawings, those kinds of things.” Walker teaches in SAIC’s Painting and Drawing Department, critique theory seminar, and the Low-Residency MFA Program; he also recently became the executive director of LAXART in California. “Just thinking about latter day heirs to that kind of scope, and thinking about Virgil in that context.” 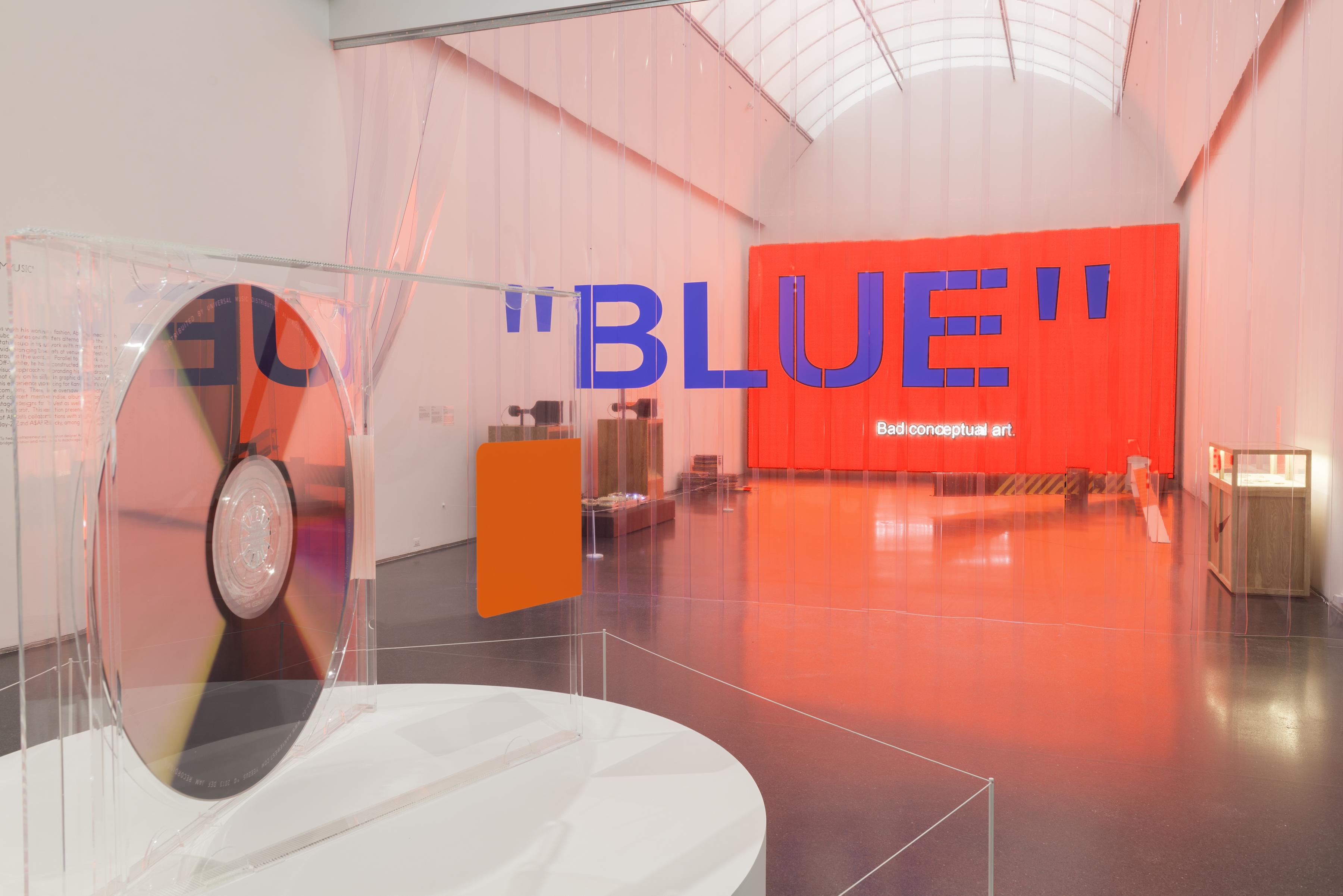 A room from Abloh’s “Figures of Speech” exhibition at the Museum of Contemporary Art Chicago in 2019. Photo by Nathan Keay, © MCA Chicago.

Walker said the pair had met through their mutual friend, writer and designer Mahfuz Sultan, and spoke to each other about their work. Sultan and his partner, Chloe Wayne Sultan, are the founders of multi-disciplinary art firm CLOCKS and were also close friends and collaborators with Abloh.

On their friendship, Walker noted that Abloh was “still willing to fail,” regardless of his established success; he still views Abloh as “finding a voice.” They shared an interest in inquiry and questioning the nature of common notions and objects. This is evident with one of Abloh’s most synonymous visual cues, the quotation marks around common words like “shoes.” Is “wet grass” wet grass? Are boots made “for walking?” Or sneakers? Abloh and Walker sought to inspire deeper thought among consumers about basic items.

In 2019, Walker invited Abloh to speak in his third-year MFA class. “He was very,” Walker emphasized, “very generous.” He said Abloh’s kindness was the centerpiece of the lecture. “That would capture the spirit of that event,” Walker said. Listening to the recordings on Abloh’s website, you can hear how much fun the two had joking about typography, playing excerpts from a DJ set, and discussing how Abloh’s platforms metaphorically flooded the MCA during his 2019 exhibition “Figures of Speech.” It’s one thing to speak as an invited guest, verbally chronologizing your work and the themes they fall under, but it’s another, more charitable notion to truly share your passions with everyone in the room.

In the brief time that we spoke, it was clear how much Abloh’s friendship meant to Walker. Brought together by creativity, Abloh’s influence continues to circulate not just outside the realm of celebrity or industrial practices, but in the people he worked with and considered friends. “He lit everyone on fire,” Lindsay Jones said of Abloh, who she cites as a “leader of the moment” and an aspiration for New York designers. “He was way bigger than us, and unreachable, but we all kind of wanted to be him. Everyone wanted to do what he was doing. It was just inspiring, but it’s also funny. It kind of makes people want to hustle a little harder. You could be like, ‘I could do that!’ and it’s like ‘No, you can’t.’”

Jones, a couture designer and the creative director of MÙSED, has been on a winning streak this year, from a Marie Antoinette-lacquered collaboration in the works with SAIC alum Evita Flores (BFA 2008), to continuing to work with mentee Zac Posen.

A week ahead of the 2022 Met Gala, Jones was tasked to assist with customizing Kylie Jenner’s dresses for the event. Jenner went on to wear a cumulus bridal gown designed by Abloh’s company Off-White; it featured appliqué white florals, a backwards baseball cap reworked into a veil, and a four-point, tulle-tiered skirt with a mesh white shirt underneath the matching white corset. I, among the other digitized onlookers, witnessed a carousel of celebrities populate the steps of the Met Gala dressed under a white-tie, “Gilded Age” jurisdiction — one that a significant area of the internet ruled Jenner guilty of not meeting the expectations of.

The design itself was Lisa Schachter’s, Jones’ close friend and former head of couture at Off-White. Schachter worked closely with Abloh on his last couture collection, even becoming the muse for “The Schachter Gown,” which is featured in the collection. Described by Abloh through a series of text messages, the woman wearing the gown “owns her own apartment”, “wears Nikes,” “and heels,” amongst other quotidian themes. “I feel like that’s very much who I am, and very much who Lisa is. I feel like there is already a synergy that exists there,” Jones said about Schachter. 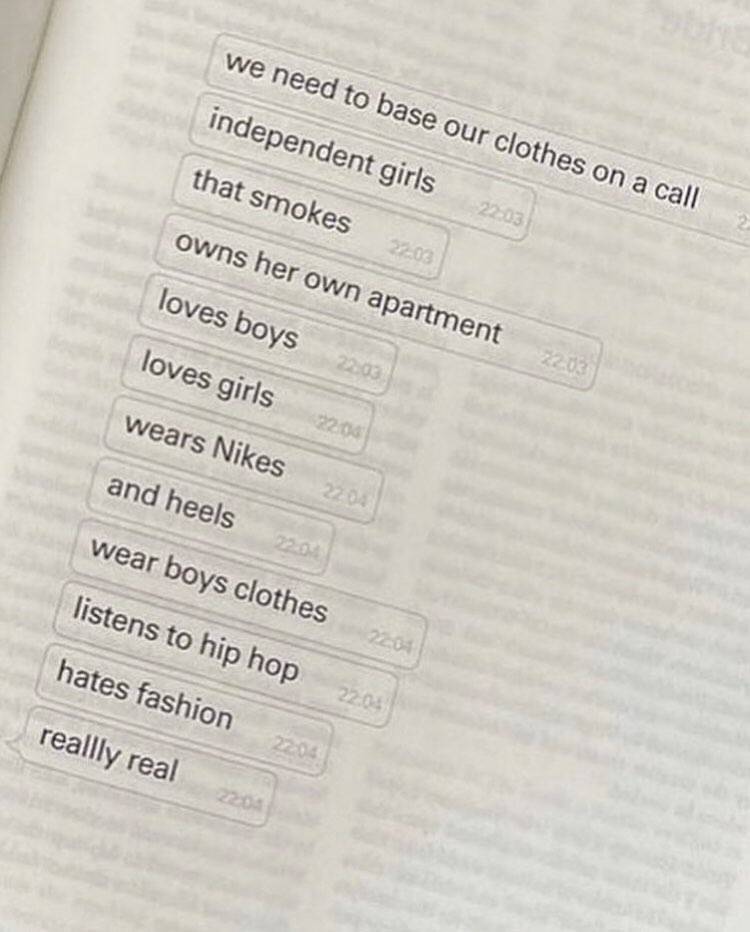 Jenner’s garment took some reworking in order to be perfect. In terms of how garments were crafted and tailored in the Gilded Age, the look compositionally fits the theme, featuring a four-point skirt (much bigger than a regular silhouette) and a custom corset designed at Jenner’s request. “There’s a lot of fabric and it took a lot of time to construct that look. It’s very much still a luxurious piece, even if you style it with a t-shirt underneath, which is a very Off-White and cool thing to do,” Jones proclaimed.

“I don’t know what [Jenner’s Off-White dress] means to everyone, but I know what that means to me,” Jones said. She noted that Jenner knew “people would come back to the theme of the Gilded Age,” and made the soulful decision to keep her promise of bringing him through his spirit.

“I think of his activities as being so much bigger than art, in a way,” Walker told me; there never was one box Abloh’s career could be put in. What Walker said to me was echoed, almost word for word, in his lecture with Abloh. As Abloh concluded recounting his upbringing up to his architectural practice, he said: “It’s not just fashion, it’s not just art — it’s all disciplines.” To directly influence innumerable areas of art and fashion with as much drive and enthusiasm as Abloh did is not only innovative, but infectious. Abloh’s influence lives on in his work, colleagues, and friends.

Arts & Culture, Featured Virgil Abloh Through the Eyes of His Colleagues: “He lit everyone on fire”
« Previous Story