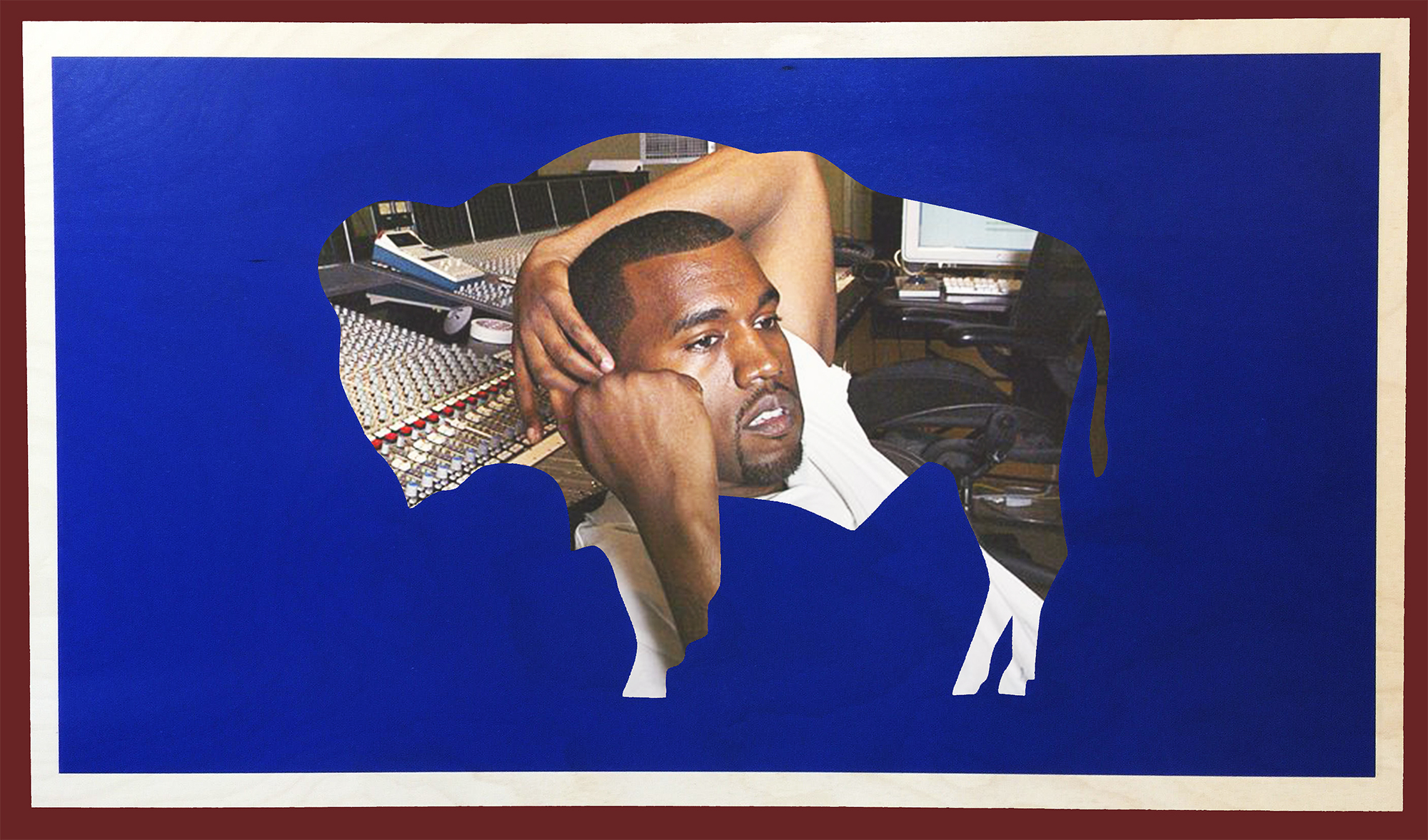 Way before the MAGA hat, shouting out Candace Owens on Twitter, saying that slavery was a choice on TMZ, and Rhymefest accusing him of abandoning the charity named after his late mother, Kanye West was generating a lot of positive attention for his Jackson Hole, Wyoming recording sessions.

Pictures of Nas, Kid Cudi, King Louie, and others dressed in ski attire and workwear started to surface on Instagram; Kanye took a picture at the airport with a young fan. The last time Kanye and Friends did an omnibus recording session was in Honolulu, and we all know how that turned out.

That too was a response to ill media attention — against a backlash over snatching Taylor Swift’s mic away at the MTV Music Awards. Perhaps the ambition of Kanye’s latest endeavor — putting together five albums in five weeks — is commensurate with the hole he’s dug himself. It’s a lot to ask of anyone, but especially a perfectionist like Kanye. As a result, the “album” has been redefined as a “seven-song album,” which any music nerd will tell you is an EP. Quality control? Sure, but the success/failure rate is a lot easier to navigate when you aren’t even dealing in round numbers.

Or is it? One of the most interesting parts of listening to the Wyoming Sessions is deciding how to navigate the very issue of quality. Can one mediocre offering spoil a classic? Is an album a failure if three really great songs are surrounded by four so-so ones? Would you feel the same if it were four really great songs? Fans are negotiating tracklists the way students plot percentages for final grades.

Anyway, in case you’ve missed a couple (or, if in your social circles, Kanye remains “canceled”), here’s the rundown of all the albums culled together from the Wyoming Sessions so far.

There’s some debate about whether this album is an instant classic (Diddy thinks so), but virtually no debate about this album being Pusha T’s best as a solo artist. Despite a laundry list of amazing guest appearances, Pusha does his best work under very visible hands — most notably The Neptunes, who produced the first two Clipse albums; Timbaland, who had a large portion of the production credit on “Darkest Before Dawn”; and Kanye, who produced most of “My Name is My Name.”

As a result, it’s the least dramatic of all the Wyoming releases, while also the most put-together. The album includes a variety of deep-cut reggae and soul samples. “If You Know You Know” sounds like what slow-walking into the club with sunglasses on feels like, and “Hard Piano” somehow associates cutting coke with Fred Astaire tap-dancing with the panic of having to get rid of a cell phone that’s been tapped by the feds. And that Drake/Birdman diss track! Pusha-T is truly a rapper’s rapper. He idolizes The Notorious B.I.G. and takes pride in assaulting beats the way rock collectors line up gemstones on their dressers.

(Kanye paid $85,000 for a picture of Whitney Houston’s drug-riddled bathroom to use as the cover art, which is either brilliant or wretched, depending on who you ask.)

Sigh. All of the diehard fans who admired the high points of “Life of Pablo” but scratched their heads at its disorganization saw this coming. This record completely ends the debate of what Kanye’s worst album is. Not a fan of “808s and Heartbreak?” Its faux-Nuwave production and mopey vocoder vocals run circles around “Wouldn’t Leave,” a ballad to Kim Kardashian in which his latest outburst is contextualized as a test of loyalty/true love. Put off by the aggressive misogyny of “Yeezus”? “Yikes” throws a holier-than-thou light on Russell Simmons’ #MeToo allegations only to advertise how many women Kanye’s bought fake breasts and asses for, how “all the bitches fuck with Ye” — and this is one of higher points. “Violent Crimes” turns one of Kanye’s most famous lines (about what happens to lecherous males once they have daughters) into an entire song, which is just as narcissistic and boneheaded as it sounds. But! But. “Ghost Town” is ridiculously brilliant, and “All Mine” bangs in the club. Lou Reed said his bullshit was better than other people’s diamonds. And that’s all I have to say about that…

Kanye and Kid Cudi’s group album. The fan favorite, it encapsulates the entire G.O.O.D. Music aesthetic: eclectic musical influences, arranged in a manner that’s off-kilter and line-blurring. One hardly knows where Rap, Rock, R&B, Gospel, Swing, Insert-Genre-Here begins and ends. And Kid Cudi! Much of said genre-bending he’s responsible for popularizing on his first two albums. But drug and alcohol abuse, as well as mental health issues, caused a slew of poor-to-mediocre outings. Anyway, he is back in full effect, introducing a vocal experimentation and inventiveness that Kanye relishes in. Similarly to how the specter of Jay-Z encouraged him to tap into his inner Rap God on “Watch The Throne,” Kudi’s seriousness put a lid on Kanye’s worst impulses. When people say they miss “the old Kanye,” they’re talking about songs like “4th Dimension,” “Reborn,” and the title track. There’s even a Kurt Cobain sample thrown in on the album closer. Producer/rapper duos are a dime a dozen, but Kudi and Kanye really sound like they’re made for one another.

Despite being on the shortlist of the best rappers ever, Nas’s flaws are low-hanging fruit. He’s notorious for picking bad beats. He’s not nearly as profound as people say he is. Sure, he’s a great storyteller, but sometimes, that’s all he is. Unlike Jay Z, there’s rarely a Nas feature in recent memory that’s memorable on a line-by-line basis. Oftentimes, his intricate rhyme schemes (which he inherited from Rakim) do all of the heavy lifting for a mediocre subject matter. That said, “Nasir” isn’t guilty of any of this. It’s just boring. The production is solid, but for the most part, Nas sounds like he’s going through the motions. Is the Diddy collab (“Not for Radio”) supposed to be a 21st-century version of “Hate Me Now?” And  “Everything” and “Bonjour” — are these the mandatory socially-conscious songs that Nas fans expect? Still, the moments when both Kanye and Nas rise to the occasion are hip-hop ecstasy. “White Label chops up a song by an obscure, 70-year old Iranian pop star, and The-Dream’s chorus on “Adam and Eve” is so weary and soulful it sounds sampled. “Simple Things” is great too, but too short. Perhaps what’s missing is an address of Kelis’s abuse allegations. (The early leaked tracklist ended with a song called “I Can Explain.”)

To date, Teyana is the only artist whose publicly talked about the pressure of rushing her project to meet Kanye’s deadline. Tracks she wanted weren’t included; an interlude where Lauryn Hill expressed her support and encouragement was left off, as well. It’s a shame —  both the reality of the situation and the fact that we, as a listening public, know it — because the blind listen has her shirking the sophomore slump like it’s not a thing. A power singer who hits her notes so effortlessly it sounds like she’s idling, throughout “K.T.S.E” she steps on the gas and leaves you in the dust. Kanye used to produce for R&B artists regularly; John Legend, Alicia Keys, Mariah Carey, Janet Jackson, Brandy, and Monica have all gotten beats from him. With the R&B/Rap barrier more porous than ever, it’s refreshing for a producer as great as Kanye to impose constraints and churn out slowed-down, sensual tempos that land mostly within the former category. Tinged with libido and longing — “3Way” might make the Greatest Songs about Group Sex list. Likewise,  “Gonna Love Me” is great for sunny days with bae.