As a member of the Chicago artistic community, I am consistently at a loss for words when people ask me what I specialize in writing about. Like many other art school students, I feel pigeonholed by labels to describe myself and my work. It’s easiest to just say that although I am a cultural journalist, my work intersects in the space between visual art, design, technology, and community (with a dollop of philosophy). I often explain that even though I’m getting a masters in arts journalism, my dream gig is to be an editor at WIRED, not Artforum. Unavoidably, the one label that comes along with what women writers, journalists, and artists research, make, and share is just that: they are women.

Not just as a woman, but as a writer focusing on art and technology, I had of course heard about Techweek Chicago and was pumped to check it out. I still am. But my enthusiasm has now been spliced with curiosity, anger, and even more ambition to dissect tech culture thanks to this: 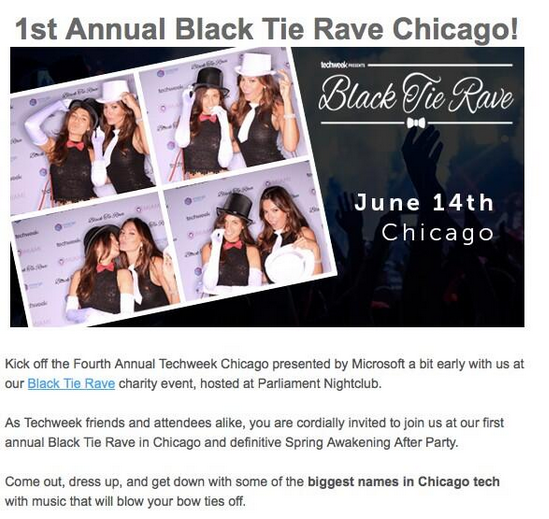 Yes, this was an actual invitation sent to attendees for a charity event called the “Black Tie Rave,” which has since been cancelled after a very just outcry from Chicago tech leaders.

It is very, very easy to see this as yet another opportunity to decry the male-dominated, “brogramming” undertones of the tech industry, but I’m more curious here about this image’s backlash and the quick turnaround that the conference has taken for damage control. The event organizers have apologized, held open discussions about the roles of women and minorities in the tech industry, and are planning more.

The key issue here, though, still lies within the apology statement from chairman Iain Shovlin:

“The last thing we want to do is alienate anyone in the community, and we sincerely apologize if this event or imagery is offensive to you.”

“If” this is offensive?

I don’t know if I’m most offended at the ridiculously skimpy outfits and the air-kisses, the pandering copy, or the really shitty invitation design.

I’ll still be attending Techweek to see how things have progressed (as well as check out the overly pink branded “Fashion Tech” summit, the only one where women are the majority of the speakers), and will report from the trenches.

2 Responses to Techweek Chicago Steps It Up