Does Anyone Else Feel Coke? 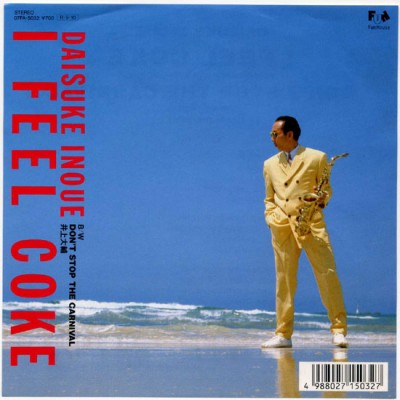 Last week, while listening to some albums I downloaded  years ago but never got around to actually enjoying, I stumbled upon the nugget of joy that is “I Feel Coke”  (1988) by Daisuke Inoue (井上 大輔). The song was nestled comfortably on disc one of the spectacular  J-Pop Sampler “CITY POP BMG FUNHOUSE EDITION” (2003), a collaborative effort from the music conglomerates Sony Music, BMG, Warner Music and Columbia to serve up only the best J-Pop  of the 1980’s  and 90’s, within the limits of their distribution rights. The album features aural gold from luminaries like the singer-song writer EPO, Yoshio Ariga (有賀啓雄), Anri (杏里) and Yoshida Minako (吉田美奈子), but the embodied feelings of Coca-Cola evoked by Inoue’s soft-drink ballad really take the proverbial cake (er, Coke).

Created as a jingle to hawk Coca-Cola at a Japanese consumers in the late 1980’s, this song has been stuck in my head for the past week and  it hasn’t shown any signs of dislodging itself. Really. All you need to do is watch this video and I’m sure you’ll feel Coke too. You’ll also feel the strong and overpowering desire to be a young Japanese business professional  in 1985, drinking a fat bottle of Coke while riding a motorcycle. I’m sure you’ll also feel like having a Coke while rollerblading and then heading off to a wooded field with some of your yuppie friends to peel garlic and finish an oil-painting.

Entertainment Does Anyone Else Feel Coke?

One Response to Does Anyone Else Feel Coke?