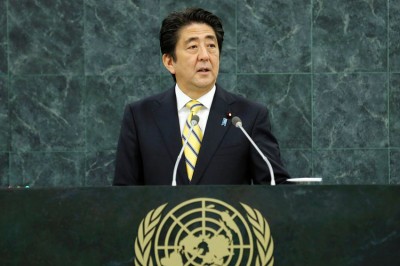 As expected by many commentators, Japanese Prime Minister Shinzo Abe devoted almost half of his speech at the U.N. General Assembly meeting last Thursday (Sept. 26th)  to a discussion of the inequalities facing women in Japanese society and government initiatives slated to address these issues.

Taking inspiration from Goldman Sachs  Asia’s co-head manager Kathy Matsui‘s theory of “Womenomics,” Abe stated in a Sept.25th Op-ed for the Wall Street Journal and in his address to the U.N., that women were the key to increasing Japan’s gross domestic product.  In yet another prefix laden statement, Abe proposed the drive of “Womenomics” to increase gross domestic product through the economic advancement of women as a key aspect of his own economic plan, commonly known as “Abenomics.”

In one of the more concrete statements from Abe’s speech, he outlined that the Japanese Government would devote over  $3 billion (over the next three years)  in providing women with better healthcare services, in addition to increasing the active participation of women in the workplace through the creation of incentives for corporations to hire and promote female employees.

Phumzile Mlambo-Ngcuka, the chief of the U.N. agency for Gender Equality, spoke on the behalf of her committee by  stating that they “wholeheartedly welcome” Abe’s efforts to provide more equality for women in Japan and that they “applaud his decisive leadership in making women and girls a top priority in his political and policy agenda.”

Though his speech did mention Japan’s patriarchal corporate culture, Abe did not outline any definite plans for doing a major overhaul of this hostile work environment. A TIME magazine online post came to a similar conclusions to my blog post from last week (but it was posted three days after mine, so you heard it here first folks!) stating that there needs to be a commitment to restructuring Japanese work culture to make it a significantly less oppressive environment for women. This is a crucial area that Abe’s government needs to focus on, as the hostility of Japanese work culture is perhaps one of the most significant factors contributing to the lack of women holding positions of power in the workplace.

It is sad that it had to come to extreme economic necessity for leaders like Abe to start recognizing and addressing Japan’s vast gender inequalities. As stated earlier, there needs to be a more structural reform of Japanese business culture, with a sustained effort to alter the treatment of women within this context. Additionally, Abe’s stated goal of raising the amount of women in leadership positions in the government and private business sectors by 30% by 2020 seems particularly under-ambitious.

Still, this is a major step for the Japanese government in acknowledging and addressing these issues. The planned reforms that Abe outlined in the speech will at least initiate the long process of giving women truly equal socio-economic opportunities in Japan.