Letters, Uncategorized Letter to the Editor — Against Racial Fetishism 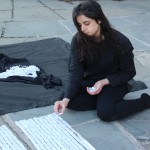