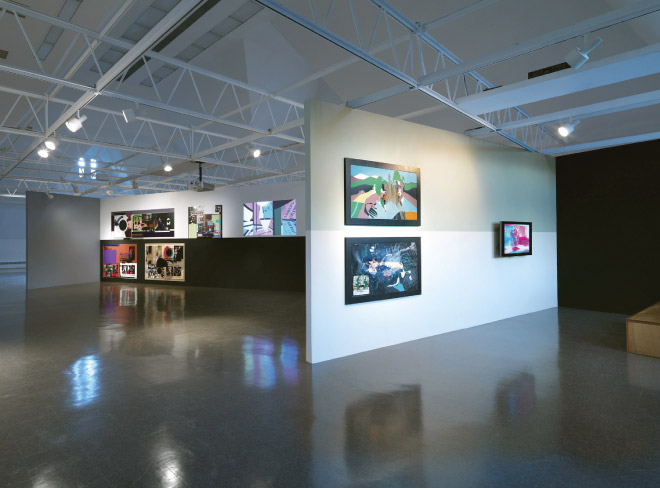 It is hard to say what is most disconcerting about “In A Saturnian World,” the first major U.S. solo exhibition for Belgian artist Anne-Mie Van Kerckhoven. Is it the eccentric installation — a cluster of disparate two-dimensional works installed on a maze of tightly clustered, bi-colored partition walls? Or is it the eerily dissonant guitar drone emanating from a pair of ceiling-mounted speakers, which permeates the entire space with a vague sense of foreboding? Or is it the form and content of the work itself ­— a curious array of drawing, painting, digitized collage, video, and interactive web animation, which feature, among other things, astrological fragments, simple geometric shapes, images of women (culled from vintage soft-core porn and contemporary fashion ads) and philosophical texts? Or what about some of the works’ acerbic titles: “Floors May Be Stained,” “United States of Europe,” “Beauty, with none of” — coupled with the ambiguous title of the show itself?

As this adroitly curated exhibition makes clear, Van Kerckhoven’s practice is predicated on the conceptual and formal structure of collage, perhaps an extension of her early training in graphic design. Her work both renews and extends the initial aims of Dada photomontage, as defined by the recent survey book “Art Since 1900:” “to destroy visual and textual homogeneity, to emphasize the materiality of the signifier over a presumed universal legibility of either the textual or iconic signified, and to stress the rupture and discontinuity of temporal and spatial forms of experience.”

Significantly, Van Kerckhoven stresses this rupture not just within single works, but also within her overall practice. Her works appear startlingly heterogeneous when viewed en masse. For example, “Adam or Eve in Paradise,” an odd, chromatically distorted video involving a nude male dancer, film crew and a guitarist — the one producing the aforementioned drone — is placed adjacent to two garishly gloopy paintings on black laminate. One of them, “Lynch and Rossellini,” is a clear reference to the director and star of the cult classic “Blue Velvet.” Elsewhere, elegant pastel drawings with collaged elements — recalling both Hannah Hoch and early Hockney – are interspersed with ungainly digital prints that look like sardonic takes on Rosenquist.

A further sense of discontinuity is bolstered by the exhibition format. The arrangement of partition walls makes it impossible to see everything at once; no comprehensive view is possible. Instead, the sightlines are as disjointed as the work itself.

So what do all these outré elements add up to? Critique is certainly implicit, but one needn’t be schooled in feminist, Marxist or psychoanalytic theory to appreciate the singular atmosphere of this exhibition — at once haunted, cryptic and wry — or to feel its unique affect. Van Kerckhoven’s works speak eloquently to the way all bodies, those of both flesh and knowledge, are destabilized and disorientated by the effects of contemporary life under late capitalism. This art may be hard to like, but it’s equally difficult to forget.