Our Audiophiles this month are Jesse Knowles (third year, FVNM and Sound) and Kira Mardikes (fourth year, Comics and Animation), who are better known as 2/3 of the band Jesse Knowles and the Charles Mingus Anilingus.

Brandon Goei: Your work is an interesting mixture of styles. Who are your main influences? Who do you think of when you think of “songwriters”?

Jesse Knowles: Songwriters? Definitely Elliott Smith. In terms of musical style, we like to listen to Stars of the Lid, Khonnor, Xela, Harvey Milk. Ben Frost. All of that music is about texture and poise, and I think we feed off of that same ideal. David Harrington of the Kronos Quartet once said that his goal in life is to play one single honest note. There are a lot of factors into something like that: the tone, the pitches, the timing in milliseconds … 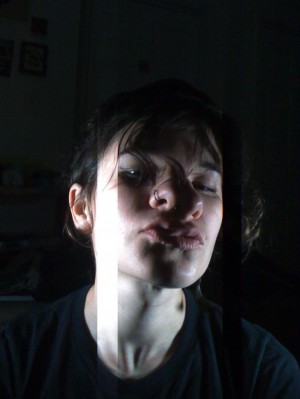 BG: Is that your goal too?

JK: It depends on the project.

BG: You two are involved in a lot of different projects …

Kira Mardikes: The current project, which is Jesse Knowles and the Charles Mingus Anilingus (CMA), that’s Jesse and me along with Woori Cho, who just left the school. Our newest effort relates a lot to Oregon, where we’re both from, which is sort of where Elliott Smith comes in (we went to the same high school). It’s a lot about the emotional space of Portland and the harmony between nature and the city.

BG: Is there a place for that here in Chicago?

BG: Does that affect your work a lot?

KM: Well, the visual aspects of one album we did as En Bateau is based on a relatively wild area that’s near the Roosevelt train stop. It’s one of the only wild areas in existence in the city. It used to be really overgrown and started to revert back to the original habitat before they tore everything down to build Target.

JK: There’s another space behind the FBI building (2111 W. Roosevelt Road) that’s bizarrely barren in the same way. They’re these rare places where the land is starting to reclaim itself. Those spaces lent themselves to the album’s theme, which was something akin to a journey through hell.

BG: How do you go about writing songs for your projects? Do you come up with material beforehand and bring it to your collaborators, or is it a mass brainstorming session?

JK: Much of the time I’ll write things on my own and work on it with the others, but I’ll also write music for Kira’s lyrics, or exchange tracks with people and build layers gradually.

BG: And do you write with an audience in mind, or is it something more like a personal statement?

JK: That depends on the project too. The CMA project is largely a character study of me as I’m trying to be something I’m not. I’m playing to a character of myself. The point of it was to expose something about Jesse Knowles by writing about other things; it’s largely confessional.