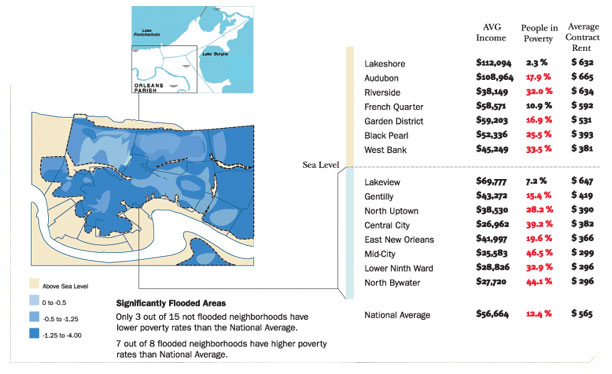 Over two months ago, the public watched Hurricane Katrina move across a radar screen and intersect with the Gulf Coast. It wasn’t the first hurricane to affect the south this year, and many people probably assumed that its effects would be upsetting but swift, disruptive but manageable, and would pass through national headlines in a matter of days.

Hurricane Katrina, however, brought a level of devastation that few people predicted. Not only did it put a major U.S. city underwater, changing it forever, it also exposed a concentration of poverty that many, including reporters, had trouble recognizing as “American.” As Illinois Senator Barack Obama pointed out on ABC, the images the world saw of those who were stranded in New Orleans simply didn’t fit with people’s conception of the American identity as middle class, defined by “credit cards” and “SUVs.” In some cases, reporters themselves seemed so shocked by inner-city life in New Orleans that they resorted to describing what Katrina’s wake opened up to the public as “Third World.”

People are now forced to grapple with questions about representation of poverty in the U.S. social landscape. How does the portion of the Gulf Coast population that could not evade Katrina’s devastation fit into conceptions of class in this country? Will New Orleans simply be regarded as an anomaly?
In an attempt to confront and break down some of the social issues and information that Katrina has put at the forefront of international thought and media coverage, F News designers in Mouli Marur’s Envisioning Information class have researched these issues from specific angles. Their findings are presented here as graphic agents, and prompt a more thorough analysis of Katrina’s affects and poverty’s reality in New Orleans and the U.S.