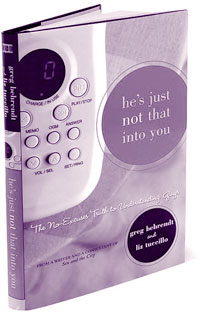 For the last few months thousands of women across this country have had one thing in common, other than being women. Whether curled up on couches, during their daily commute, or while doing an intense workout, they are all reading He’s Just Not Into You, the book that has picked up a huge following after one of the authors appeared on Oprah in September. The authors, Greg Behrendt, a former writer for Sex and the City, and Liz Tuccillo, share why women should no longer waste time on guys “who just may not be into them.”

On the surface, the reading of this may seem like a liberated, unified, multi-generation front of women who are going to finally stop waiting by the phone for that guy-who-just-isn’t-into-them to call. Upon deeper reflection, one has to question why women still make excuses for men and why it is presumed that women are actually on their couches watching Sex and the City and waiting for that guy-who-just-isn’t-into-them to call. Speaking of being presumptuous, after many conversations with girlfriends who embarrassingly actually purchased this book, I realized that I hadn’t even picked it up out of fear of joining the cult of women who needed a book to let them in on the fact that a guy didn’t particularly like them. After several women friends urged me to walk toward the light of liberation, I headed to my nearest bookstore, which happens to be Border’s, purchased a cup of green tea, snagged a seat by the window and cracked open He’s Just Not Into You. Upon opening the book and taking a look at the table of contents, I was shocked, even somewhat appalled, by the chapter headings, such as Chapter One: “He’s just not that into you if he’s not asking you out.” A few of the chapter titles that followed were: “He’s just not that into you if…”

These titles seemed self-explanatory, so I began to ponder why a book would need to be written to spell out the obvious. After inspecting each chapter listed, I observed the very concise chapter set-up. The chapters began with a short intro, a woman’s question in letter format, Greg’s response to the letter; a female perspective by the co-author, Liz, on Greg’s advice, and a poll of men that the authors know, pretty much agreeing with what the authors said.

Liz’s introduction begins with the day that she was introduced to the idea of He’s Just Not Into You. She recounts that Greg sat in the writers’ room of Sex and the City while women exchanged ideas for the show and shared relationship experiences. Liz started to ask Greg for advice about what was going on with her guy, when it was revealed to her by Greg that her guy just wasn’t into her and that women constantly make excuses to overlook this fact. She describes this revelation as “liberating and intriguing.”

Greg starts his introduction in the same manner, recounting the situation in the writing room. He tells how one of the beautiful writers for the show asks for advice and he has to break to her the fact that the guy she’s seeing just isn’t into her. He goes on to say that when a man is into you he calls, comes over, wants to meet your friends, etc. He also goes on to say that men are not complicated at all and that “a man [would] rather be trampled by elephants that are on fire than tell you that he’s just not into you.”

After the introductions, the deeply “revelatory” pieces went a little like this:

Dear Greg,
I have been in a relationship with my boyfriend, who I approached and asked out, for two years. My guy is really great, affectionate, and is a very successful businessman who travels frequently. We’ve lived together for a year and I don’t know if this is a sign that he isn’t particularly into me, but he rarely calls me whenever he is out of town, we never go out, and a few months back I found a box of letters from women, who in the letters all thanked him for wonderful nights of pleasure. Also, a couple of nights ago my boyfriend left really late and hasn’t returned home since. He called and told me that he couldn’t explain why he didn’t come home, but that he’d explain when he got back. Three days later when he arrived he told me that he didn’t want to be with me anymore. What does this all mean? I don’t understand his mixed messages; I thought we had something great!
Sandi

Dear Sad Sandi,
Your first mistake was approaching the guy. Everybody knows that women aren’t supposed to approach men. We enjoy the chase! Never approach any guy that you are in to, if he likes you he’ll approach you. As far as this guy being into you, he’s about as into you as… ok, no example needed, he’s just not! He’s crazy for not valuing a relationship with a beautiful, smart, talented gal like you, so stop waiting around on this bum, and go out and find that guy who will appreciate you.
Greg

Okay, maybe it’s not this bad, but why do we need a book that outlines examples of dishonest behavior to let us in on the fact that a man doesn’t care about us? Why must it be written out for us in bold black and white text that when a man cheats on us, no matter what his excuse, he’s not as into us as he claims to be? And why do we need some author, who we don’t know, telling us how “beautiful” and “great” we are?

I also have my doubts about why the author seems to continually reinforce the idea of the male assuming the role of aggressor. Why can’t a woman go after what she wants without being called too aggressive? I mean, seriously, let’s step out of the Stone Age. If women left the drive to “get what they want” at home, we’d still be waiting to be allowed to go to the polls. Let’s not insult our own intelligence.

Women are smart enough to know what is good for us, so why do women make choices to keep men in their lives who don’t make them feel good? And why have we become the number one target for self-help books? The reality, in the opinion of Caroly Kinsey Goman, PH.D, once a clinical psychologist and now a consultant and keynote speaker, is that “self-help usually focuses on that negative quadrant of your life, the thing that isn’t working.” She explains, “And the more you define yourself by that narrow little piece that’s out of whack, the greater the chances that you’re going to stay out of whack.” How helpful can self-help books be when you see volumes of these things in your local bookstore? If self-help books helped, wouldn’t a person only need to read one?

I guess it isn’t so bad to have a book encouraging women to go out and find someone who will appreciate us, but only if it helps. If my girlfriend who read this book cover to cover is still calling me to ask whether or not she should call her ex-boyfriend who disappeared after their three-month relationship, we have a problem.

He’s Just Not That Into You
The No Excuses to Understanding Guys
by Greg Berhrendt and Liz Tuccillo
Published by Simon & Schuster in 2004.

Uncategorized Book Review: He’s Just Not That Into You 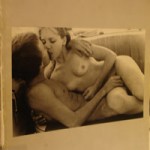 Read ’em for the Pictures: A Peek Inside the...