Visiting Artist Ibrahim Mahama lectures on his work in the art world and beyond. 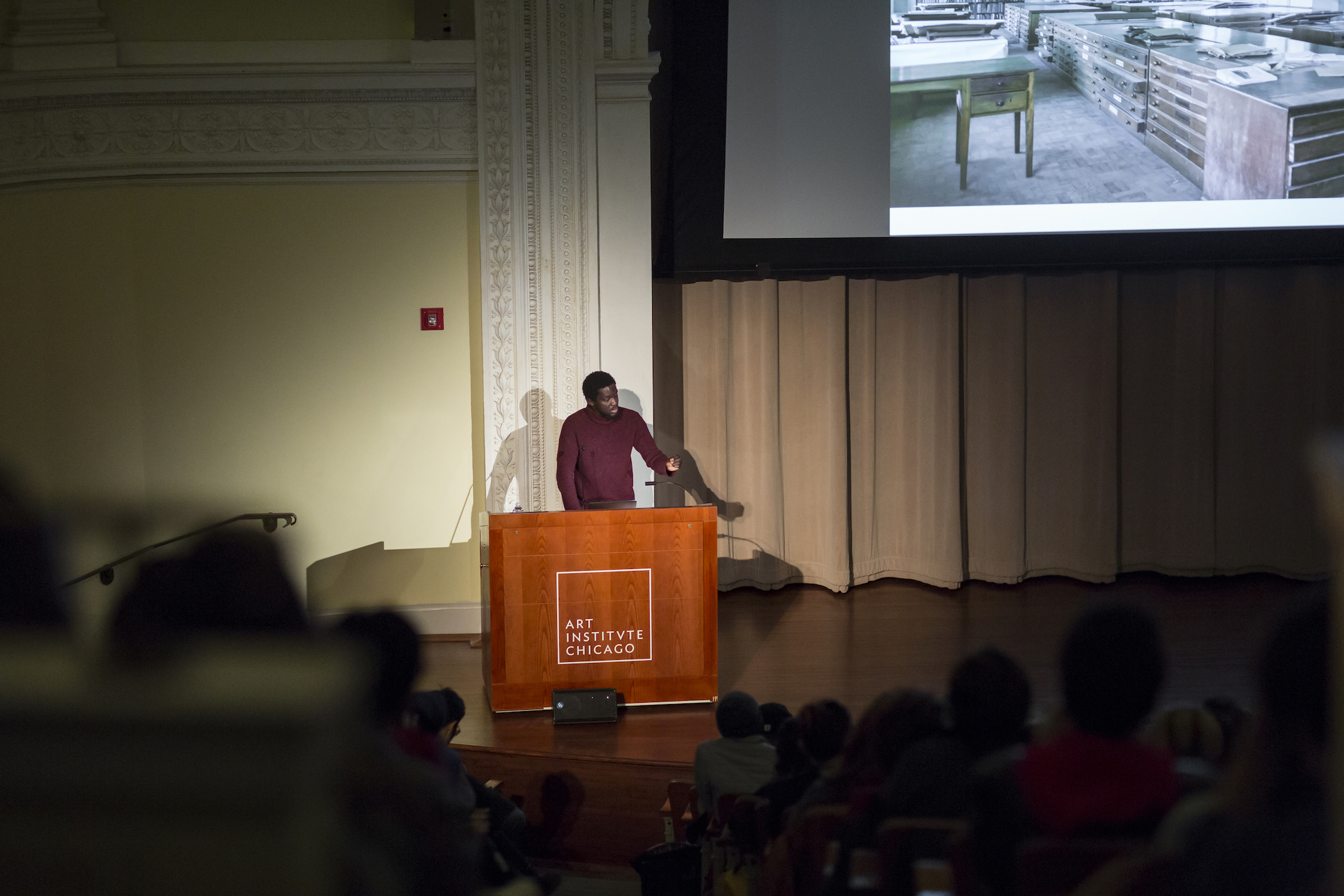 The School of the Art Institute of Chicago’s (SAIC) Visiting Artists Program reliably brings in coveted artists for an intimate look at their work. Recently, this included a widely anticipated conversation with Ghanaian artist Ibrahim Mahama, presented in partnership with SAIC’s Institute for Curatorial Research and Practice. This conversation was a part of the ongoing project, “Working Labor” by Faculty Research Fellows Daniel Eisenberg and Ellen Rothenberg.

Ibrahim Mahama is a visual artist who never wanted to fit inside a box. His country, he said during the lecture, “inherited a British curriculum of study,” meaning Painting majors like him could only study how to use paint. Including anything else in the practice of painting was a big no-no. There was virtually no existence or allowing of any form of interdisciplinary art until a collective of teachers began letting their students explore and experiment.. Ibrahim, who “just wanted to make art, however, wherever,” developed an art practice resisting all stricture.

Almost bashful, Mahama introduced his practice during the lecture with an overview of jute sacks found in Ghanaian marketplaces. Jute sacks, brown tweed bags tied at the top with rope, are emblematic of the trade markets he grew up near and now works closely with. Manufactured in Southeast Asia, these sacks are imported by the Ghana Cocoa Boards to transport cocoa beans but end up as multi-functional objects, used for transportation of food and commodities and for many daily chores around the home.

Initially used to transport cocoa, and then wheat, rice and multiple grains, Ibrahim believes every usage leaves behind a residue. Every point of contact creates a change. He buys old jute sacks in exchange for newer ones from merchants, and then sews them together with a network of collaborators under specific labour conditions. These giant pieces are then superimposed on buildings such as theaters, museums, luxury apartments, and social housing projects (for the Venice Biennale 2005 he covered two external walls of the Arsenale with 300-metre-long hangings).

His installations create an imprint on landscapes for a finite period of time, aiming to initiate dialogues that explore shared histories while also addressing contemporary Africa and hopefully conceptualizing the future. When superimposed on already existing building structure, these tapestries shroud it for awhile, create a different landscape and expose the stark differences between the actual sacks and the buildings they cover.

“I like to complicate things,” Mahama said in the roundtable conversation that SAIC facilities for 15 students the day after the lecture. “A shoebox is never just a shoebox. I look at the artistic and political implications of objects.  What happens when you pick up objects from different places with specific histories and memories and put them together to create a new object?”

He first exhibits his work in the very same spaces these objects came from. The works do not just occupy the sites, the sites occupy the work. The pieces, originally shown in Ghana, often travel. Every time one is dismantled and reassembled somewhere else,“the composition will change,” Mahama said during the roundtable. Accumulated history weaves through the sewn-together piece. Speaking to an important semantic point, he continued, “You guys here talk about ‘found objects’ but I don’t think of these as found. More like they have been here before me and they have shaped the place I am in. They all have traces of that history, of everywhere they have been. Ghosts. Residues.”

Ibrahim’s approach to art is political to say the least. He tries to look beyond objects that form the context of his country and engage with intangible, often overlooked aspects of their  narratives. He shares these updated stories all around the world, most recently in Brazil, Germany and Malta. He also just completed a yearlong residency with the German Academic Exchange Service, Deutscher Akademischer Austauschdienst (DAAD).

Mahama’s increased visibility has allowed him the financial freedom to generate a vision beyond art-making. In the roundtable discussion, he talked about buying up land for agriculture and defunct factories in the villages of his country to get them working. He wants workers to not have to travel to the capital in search of jobs. He wants people to live in their homes.

He has already begun building artmaking spaces. He wants now to catalyze a shift in the Ghanaian meaning of art on an institutional level. He wants his children to not have to face the same struggles he faced in college. He invites traditional artists, engineers, scientists, and beyond to create sites of art, “Not make art to fit inside of a building like museums, but for the building itself to become a site of art.” He wants to build an educational ecosystem that better fits his country.